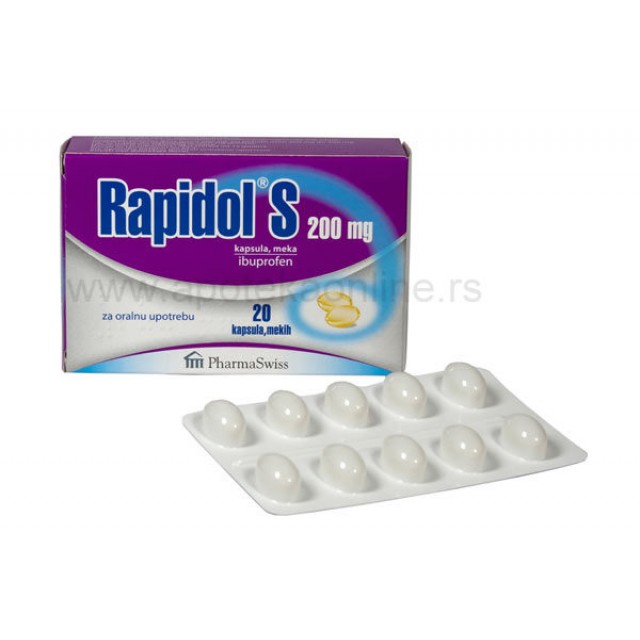 Carefully read this manual, as it contains information that is important to You.

This medicine is available without a doctor's prescription, However, it is necessary to carefully use the cure with Rapidol, to achieve the best results with him.
The manual save. You may need to read it again.
If you have any further questions, please contact to the pharmacist.
If your symptoms get worse or if it does not get better after 3 days, you must contact your doctor.
If someone is a side effect of becoming seriously or you notice some side effect that is not specified in this manual, please notify your doctor or pharmacist.

In this walkthrough, pročitaćete:
-What is the cure with Rapidol and what it is intended for
-what you should know before you take the medicine with Rapidol
-How to use the drug with Rapidol
-Possible adverse effects
-How to store medicine Rapidol with
-Additional information

WHAT IS DRUG RAPIDOL WITH AND WHAT HE'S SUPPOSED TO DO.
Rapidol S contains the active substance ibuprofen, which belongs to the Group of medicines known as non-steroidal anti-inflammatory drugs (NSAIDS). These drugs are your actions reduce an elevated body temperature, reduce pain and eliminates the signs of inflammation.

With Rapidol is used to relieve pain with headaches, migraines, back pain, menstrual pain, zuboboije, inflammation of the nerve (neuralgia), pain in muscles, Rheumatoid pain, symptoms of colds, flu and fever.

When you are taking the medicine with Rapidol, particularly note:
-If you have or have ever had asthma
-If you are having problems with kidney, liver or heart
-If you are already taking non-steroidal anti-inflammatory drugs (NSAIDS)
-If you have ever had high blood pressure or heart weakness, consult with a doctor before applying this medicine
-If you suffer from diseases of the connective tissue disorders or systemic lupus erythematous (SLE)
-If you have problems with bleeding or blood clotting
-If you are told that you have intolerance to some sugars
-If you are an older person
-If you have previously had inflammation of the bowel, ulcerative colitis or Crohn's disease
-If you receive regular therapy that is prescribed by a physician (see part "application of other medicines")

This drug belongs to a group of drugs (NSAIDS) which can affect fertility in women. This effect disappears after cessation of therapy.

You may experience difficulty breathing, in patients who have or have had an allergic disease.

Rarely reported and serious skin reactions (such as Steven-Johnson's syndrome) due to the application of NSAIDS. If you get symptoms such as rashes, ulcers in the mouth or lining up at some other signs of an allergic reaction, you should immediately stop using the drug with Rapidol.

The risk of bleeding, ulceration or perforation of the stomach, colon or dvanaestopalačnom colon (gastrointestinal tract) increases with increasing doses of NSAIDS, in patients suffering from an ulcer, as well as in older patients. It is therefore recommended to begin treatment by using the lowest dose. Contact your doctor to discuss the introduction of protective medicine in therapy.

Contact your doctor if, immediately after the beginning of application of this medication you notice any unusual symptoms in stomach, especially if it comes to the appearance of dark stools, vomiting blood or pain in the stomach.

Medications such as ibuprofen can be associated with an increased risk of myocardial infarction or stroke. The risk is increased by applying large doses for a long period of time.

No need to exceed the recommended daily dose or the duration of a session (3 days), unless otherwise lekarnije You recommend!

If you have heart problems, or you have had a stroke, or you feel that you belong in a risky gmpu patients (for example, if you have high blood pressure, šećemu disease, elevated cholesterol or are a smoker), you should consult with a doctor before applying this medicine.

Long-term application of any remedy for the pain in order to mitigate the headaches, can result in its deterioration. If you get headaches or other symptoms, pain and fever continue or get worse, or if new symptoms arise during the application of medicine contact a doctor or to the pharmacist.

Application of other drugs:
Tell your doctor and to the pharmacist if you are taking or have you recently go picking up any other medicine, uključujuii and those that can be purchased without medical prescription.

Do not take medicine with Rapidol if you are taking warfarin or heparin (blood clotting medication), unless it is recommended by a physician who will carefully monitor Your health status.

When the simultaneous implementation, some drugs can affect the effectiveness of ibuprofen or vice versa. Therefore, it is necessary to seek the advice of a doctor before applying ibuprofen with other drugs.

Application of cure with Rapidol in the period of pregnancy and breastfeeding:
Pregnant women in the first 6 months of pregnancy must be posavetuju with your doctor before you start taking this medicine. This drug should not be applied in the last trimester of pregnancy.
Ibuprofen in very small concentrations can be detected in majćinom milk and has no detrimental effect on the sucker. Therefore, you do not need to interrupt breast-feeding because of short-term application of ibuprofen in the recommended doses.

The influence of the drug Rapidol to the management of motor vehicle and handling machines:
Rapidol with no influence on the ability to motomim vehicle or machinery.

Important information about some of the ingredients of the drug Rapidol with:
Rapidol S contains a secondary substance sorbitol. In the case of some sugars, contact your doctor before using this drug.
HOW TO USE THE DRUG WITH RAPIDOL
Adults and children older than 12 years:
-starting dose is 2 capsules. If symptoms subside, continue with 1 to 2 capsules every 4 hours.
-Do not take more than six capsules (1200mg ibuprofen) during 24 hours. The capsules do not chew. Swallow the capsule with water.

Seniors:
NSAIDS should be taken with caution in elderly patients because they often occur unwanted reactions.

This product is intended for a short-term deployment. Take the smallest dose during the shortest period necessary to relieve symptoms. Do not take Rapidol with more than 3 days unless otherwise recommended by Your doctor.

If you take more than one medication with Rapidol than it was supposed to:
-If you have taken a higher dose of Rapidol with than it should, speak with Your doctor or pharmacist.
-may affect the following symptoms: nausea, vomiting, abdominal pain, headache, dizziness, drowsiness, blurred vision or ringing in the ears.

If you forget to take the medicine with Rapidot:
-do not take a double dose to make up for the missed.
-If you suddenly stop taking medication with Rapidol
-If you have any additional questions about applying this medicine, talk to your physician or to the pharmacist.

POSSIBLE UNWANTED EFFECTS:
Drug Rapidol with, as well as other drugs, can have unwanted effects, although she does not have to occur at all.

If you get any of the following adverse reaction, stop using medication and contact your doctor:
-Discomfort or unexplained abdominal pain, problems with digestion, nausea, p