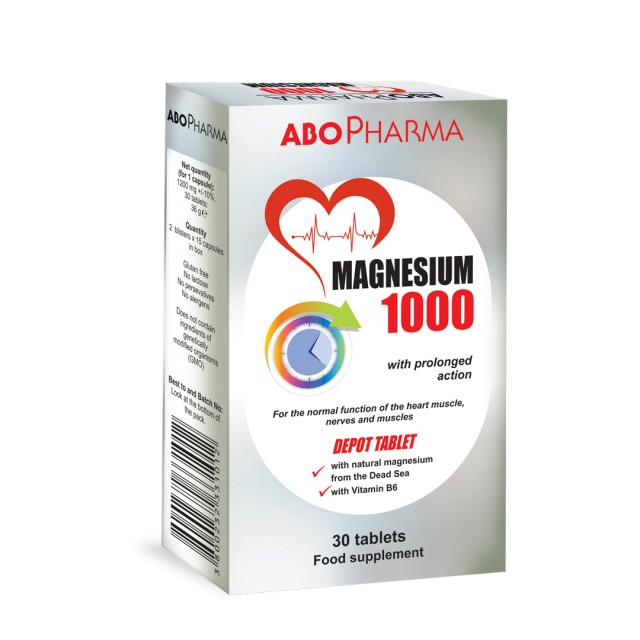 Based on 0 reviews. - Write a review

This offer ends in:

ABOPHARMA® MAGNESIUM 1000 is a specially developed formula of two forms of magnesium and vitamin B6, because as a tablet it has two phases of action:

• Magnesium citrate, which is released immediately after ingestion.

• Magnesium oxide which has a prolonged release

Magnesium citrate is an organic form of magnesium with high bioavailability. This magnesium is much easier to dissolve and absorb in the body, activating energy processes. Magnesium oxide has a prolonged release. Extracted from the Dead Sea, known for its high concentration of mineral salts and high levels of elemental magnesium. It is slowly released from the tablets through the so-called. "Controlled" release. In this way, some of the magnesium in the tablet is immediately absorbed to activate the body's energy processes by participating in the production of adenosine triphosphate (ATP), which is the main source of energy for cells. The rest is released gradually, in small doses, providing the required level of elemental magnesium throughout the day for over 500 reactions in the human body. It is known that the human body cannot synthesize magnesium on its own, nor can it store it for long. Unused magnesium is released from the body relatively quickly, and in certain groups of people this process is much more intense, e.g. those who engage in strenuous physical activity or active athletes lose more of this mineral through sweating, while in others it is excreted more in the urine. It is important not to let the magnesium levels in your body fall below the recommended levels!

The product of AboPharma MG 1000, tablets is a dietary supplement with natural magnesium originating from the Dead Sea and vitamin B6 intended for muscles, nerves and heart muscle.

Adults: Take half one tablet daily, with plenty of fluids.

The recommended daily dose should not be exceeded.

Dietary supplements cannot be used as a substitute for a varied and balanced diet!

Keep out of reach of children.

Store in the original package, protected from light and moisture at a temperature up to 25ºC.

Made in: The Netherlands