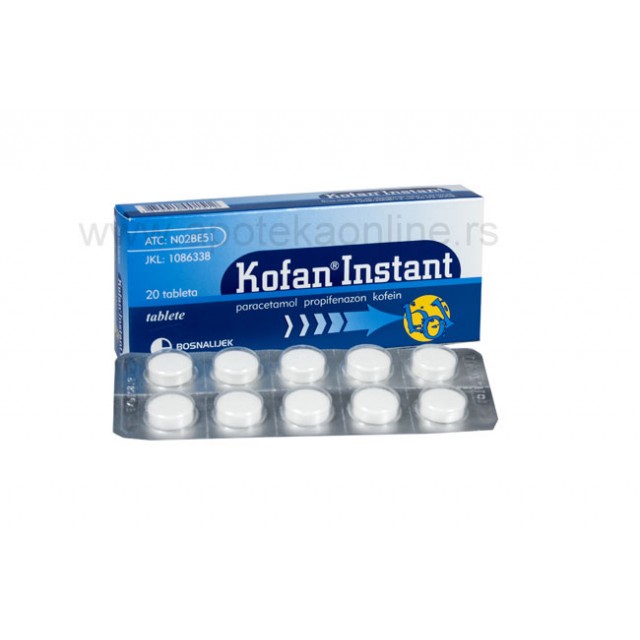 Carefully read this manual, as it contains information that is important to You.

This medicine is available without a medical prescription. However, it is necessary to carefully use the cure KOFAN INSTANT pills to help him achieve the best results.
The manual save. You may need to read it again.
If you have any further questions, please contact to the pharmacist. -If your symptoms get worse or if it does not get better, you need to contact your doctor.
If someone is a side effect of becoming seriously or you notice some side effect of kojc not specified in this manual, please notify your doctor or pharmacist.

What is CURE KOFAN ® INSTANT tablets and what he's supposed to do.
INSTANT KOFAN ® tablets are a combined medication that is applied for the pain of different origin, as with elevated body temperature.

Cure KOFAN ® INSTANT contains three active components: paracetamol, propyphenazone and caffeine. Paracetamol and propyphenazone possess analgetska (reduces pain), antipiretska (lowers fever) and antiinflamatoma (protivzapaljenska) properties. Analgetskog mechanism and antiinflamatornog of action based on the inhibition of the synthesis of prostaglandins and antipiretsko action is realized through the Center for temperature regulation in the brain (hypothalamus). Caffeine works known mechanisms for ksantinske derivatives, of which important stimulating effect on the central nervous system, as well as the activation of the vital centers for breathing and blood circulation.

KOFAN INSTANT tablets are applied to:
-Pain of different origin, such as headache, toothache, migraine, pain in the area of individual nerves, pain in the joints, muscle pain, post-traumatic and post-operative pain, painful periods
-Increased body temperature due to different infections
-the drug is intended for adults and children older than 7 years

Don't keep applying KOFAN ® INSTANT tablets if anything outside of these apply to you. If you are not sigumi, consult with Your doctor before applying this medicine.

When you are taking the medicine KOFAN ® INSTANT tablets, particularly note:
-Preparations based on pirazolona and paracetamol should not be applied for longer than seven days. Possible needs for further treatment includes medical account, and control of blood parameters which could predict the appearance of side effects.
-of any spam that reaction of the organism for which you suspect may be linked to the application of the drug is recommended as soon as possible inform the doctor or pharmacist.
-Paracetamol and preparations that contain it should be applied with caution if you have a much reduced renal or liver function.
-due to the presence of paracetamol in the table of contents KOFAN ® INSTANT tablets, caution should be exercised if you are dependent on alcohol, because of the increased risk occurrence of liver damage or stomach bleeding.

Application of other drugs:
Tell your doctor and to the pharmacist if you are taking or have recently taken any other medication, including those that can be purchased without medical prescription.

Caffeine:
-Simultaneous application of caffeine and ephedrine-containing products should be avoided for prekomeme adrenergic stimulation, which can lead to increased blood pressure, increased heart rate and the occurrence of cardiac arrhythmias
-interaction with benzodiazepines may occur in different forms, and cannot be predicted
-Application of caffeine with klozapinom increases your risk of developing toxic side effects klozapina
-Oral contraceptives, cimetidine and disulfram slow caffeine metabolism
-Caffeine slows elimination of theophylline, while hinolonski antimikrobici slow the Elimination of caffeine

KOFAN INSTANT tablets do not apply at the same time with CNS stimulatorima or MAO inhibitors.

Application of cure KOFAN ® INSTANT pills during pregnancy and breastfeeding:
Before you start taking any other medications, consult your doctor or pharmacist.

Pregnancy:
Paracetamol and caffeine passes placentamu barrier. KOFAN ® INSTANT tablets can be applied during pregnancy, but only on the advice of doctors, and with his control, especially in the first three months and over the last six weeks of pregnancy.

Breast feeding:
The active components of the drug excreted in breast milk, infants may experience hypersensitivity to ingredients. If you apply the medicine KOFAN's INSTANT, nursing mothers to stop breast-feeding preporućuje and replace him with an alternative to eating infants.

Important information about some of the ingredients of the drug KOFAN ® INSTANT tablets:
There are no special note regarding a secondary matter in the content.

HOW to USE MEDICINE KOFAN ® INSTANT tablets:
Cure KOFAN INSTANT tablets always exactly the way You explained it to Your doctor. If you are not quite sigumi, proveritesa your doctor ilifarmaceutom.

Note: the tablets should be taken with plenty of water or other liquids.

If you take more medicine KOFAN INSTANT tablets than you should:If you have taken an overdose of medication, during the first 24 hours for symptoms of poisoning paracetamolom as nausea, vomiting and abdominal pain. The poisoning is more likely in the presence of alcohol. It is recommended as soon as possible to contact the physician who applies the adequate treatment.

If you suddenly stop taking medicine KOFAN ® INSTANT tablets:
Abrupt application of medication should not have a detrimental effect on your body.

POSSIBLE UNWANTED EFFECTS:
-Cure KOFAN INSTANT tablets, as well as other medications can have unwanted effects, although she does not have to express at all.
-KOFAN ITNSTANT pills are well tolerated and rarely cause adverse effects.

Paracetamol:
Although rare, application of paracetamol can cause Teakcije hypersensitivity with symptoms such as itching, skin redness, urticaria (hives), shortness of breath, swelling of the skin and/or mucous membranes, and there have been individual instances of severe hypersensitivity reactions ( anaphylactic reaction and anaphylactic shock). Very rarely are there cases of decreased the number of red blood zmaca, reduced the number of white blood zmaca and/or blood platelets, insufficient secretion of antidiuretic hormone and decreased body temperature. Described is that paracetamol, especially at higher doses, can have a toxic effect on the liver, which is manifested in the form of loss of appetite, nausea, vomiting, abdominal pain.

Propyphenazone:
Most commonly seen abdominal disturbances in the form of nausea, prekomeme phenomena of gas in the intestines, vomiting and abdominal pain. Very rarely can occur dizziness, headache, lack of concentration and lethargy. There are very few, individual cases of reduction of beiih blood zmaca or red blood zmaca (autoimmune haemolytic anaemia).