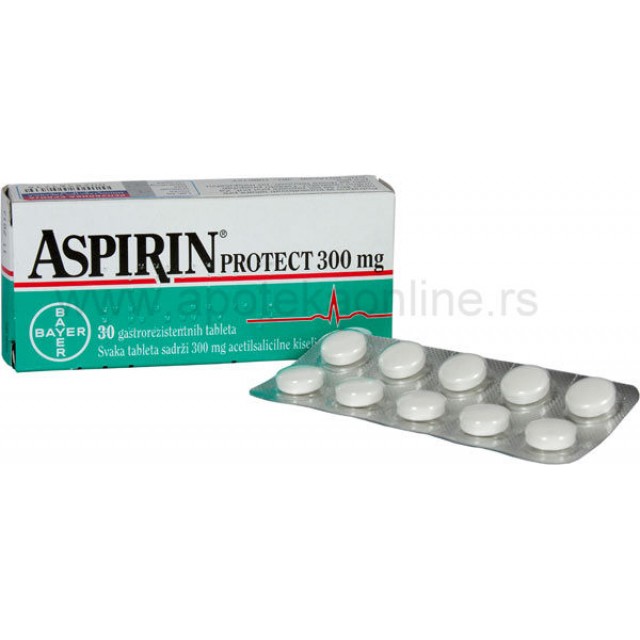 Carefully read this manual, as it contains information that is important to You.
This medicine is available without a medical prescription. However, it is necessary to carefully use the drug ASPIRIN protect, to achieve the best results with him.
The manual save. You may need to read it again.
If you have any further questions, please contact to the pharmacist.
If your symptoms get worse or if it does not get better, you need to contact your doctor.
If someone is a side effect of becoming seriously or you notice some side effect that is not specified in this manual, please notify your doctor or pharmacist.

What is the DRUG ASPIRIN protect and what IT is INTENDED for
ASPIRIN protect inhibits slepljivanje and buildup of blood platelets (thrombocytes) and thus prevents the formation of blood clots (thrombi)-inhibition of platelet aggregation.

What YOU SHOULD KNOW BEFORE YOU TAKE the DRUG ASPIRIN protect Drug ASPIRIN protect you can't use:
-If you are allergic (hypersensitive) to acetylsalicylic acid, Salicylates or any of the other ingredients of the drug ASPIRIN protect
-If you have previously had with the use of salicylate or other nonsteroidal antiinflamatornih drugs astmatični attack or other hypersensitivity reactions (allergic)
-If you have an ulcer in the stomach or colon dvanaestopalačnom
-If you have an increased tendency to bleeding (hemorrhagic Diathesis)
-If you have serious kidney disease
-If you have a serious disease of the liver
-If you have serious heart disease
-If in parallel you are taking methotrexate at doses of 15 mg per week or more
-in the last trimester of pregnancy
-in children under the age of 16 years with the exception of preventing thrombosis in surgical interventions on heart

When you are taking the drug ASPIRIN protect particularly note:
-If you are hypersensitive (allergic) to other drugs for pain, inflammation (antiinflamatorna media) or on some other allergens
-If you have previously had an ulcer on žalucu or colon or želudačnocrevna hemorrhage
-If you receive treatment antikaogulantnim drugs (see part, On what you need to be aware if you are taking other medicines ")
-If you have renal impairment
-If you have a liver function
-Ibuprofen may disrupt the beneficial properties of gastrorezistentnih tablets of ASPIRIN protect. Consult your doctor if you are taking ASPIRIN therapy, protect, and taking ibuprofen for the pain.

Acetylsalicylic acid may cause bronchospasm (respiratory muscles) and that causes asthma attacks or other hypersensitivity reactions (allergic). Risk factors are already existing asthma, hay allergies, polyps in the nose or chronic disease of the respiratory system. This also applies to patients who exhibit allergic reactions (e.g., skin reactions, itching, hives) on other substances.
Due to its inhibirajućeg effect on the accumulation of platelets that lasts a few days after taking acetylsalicylic acid can lead to a tendency towards increased bleeding during and after surgery (including minor surgery, e.g., tooth extraction).
Caution should be used if you have a disease, red blood cells (nadostatak glukozo-6-phosphate dehydrogenase).
In the low-dose acetylsalicylic acid reduces the excretion of uric acid. This can cause attacks of gout in patients who have a predisposition.
Protect ASPIRIN should not be given to children and adolescents in case of viral infections with or without temperature if you do not, see Council doc. With certain viral diseases, especially influenza type A, influenza type B and varičele, there is a risk of Ray's syndrome, a very rare disease that can be life threatening and requires immediate medical intervention. The risk may be higher if the acetylsalicylic acid presented as accompanying therapy; However, not a proven causal-consequential connections. If you are in such disease report persistent vomiting, it can be a sign of Ray's syndrome.

Application of other drugs:
Tell your doctor and to the pharmacist if you are taking or have recently taken any other medication, including those that can be purchased without medical prescription.

Should take into account the following interactions between drug and ASPIRIN protect the following medications:
Increase in effect increases the risk of unwanted effects:
-Anticoagulants (drugs against clotting), thrombolytics/other drugs that prevent the buildup of blood platelets (thrombocytes): acetylsalicylic acid can increase the risk of bleeding when taken before thrombolytic therapy
-System glukokortikosteroidi, except hydrocortisone injection used as replacement therapy in Addison's disease or the use of alcohol: increased risk of želudačnocrevnih ulcers and bleeding
-Other non-steroidal anti-inflammatory drugs with salicylates are used in larger doses; Displayed increased risk of ulcers and bleeding želudačnocrevnih
-Antidiabetic agents, for example. insulin, sulfonilurea: the level of glucose in the blood can be reduced
-Digoxin (a drug to boost the heart's work)
-Methotrexate (a medicine used in the treatment of cancer and certain rheumatic diseases)
-Valproinske acid (a drug used for epilepsy)

Weakening effect:
-Diuretics (medications that increase the excretion of urine)
-Certain medications to lower high blood pressure (ACE inhibitors)
-Drugs used in gout (podagre) and which accelerate the excretion of uric acid
-Simultaneous application of ibuprofen may reduce the effect of acetylsalicylic acid on prevention of blood clotting. Taking the drug ASPIRIN protect with food or beverages ASPIRIN protect tablets do not take with alcohol.

Application of the drug ASPIRIN protect during pregnancy and breastfeeding:
Before you start taking any other medications, consult your doctor or pharmacist.
If you find that you are pregnant during therapy with ASPIRIN protect, immediately notify Your doctor.
During the first and second trimesters of pregnancy ASPIRIN protect can only be used if your doctor has prescribed.
In the last trimester of pregnancy acetylsalicylic acid, the active substance in the drug ASPIRIN protect, must not be used due to an increase in the risk of the occurrence of complications for the mother and child before and during childbirth (see part "When you can't take the cure").
Salicilati and its metabolites are excreted into breast milk in small amounts.
Since I have not noticed any unwanted effects on suckling after occasional use, it is usually not necessary to discontinue breast-feeding. However, in the case of extended use, or the use of high doses, it should stop breastfeeding.

The influence of the drug ASPIRIN protect on the management of motor vehicle and handling machines:
Not noticed any effect on the ability to drive and use machines.

Important information about some of the ingredients of the drug ASPIRIN protect:
If you are sensitive to any of the auxiliary substances, please notify Your doctor.

-42 %
INFRARED THERMOMETER XL-F03
XL-F03This thermometer is able to measure your body temperature to see if you have a fever, simply by pointing at your forehead. It's safe and accurat..
2,899.00 RSD 4,999.00 RSD
Add to Cart
Add to Wish List Compare this Product
Buy Now Ask Question
Quickview