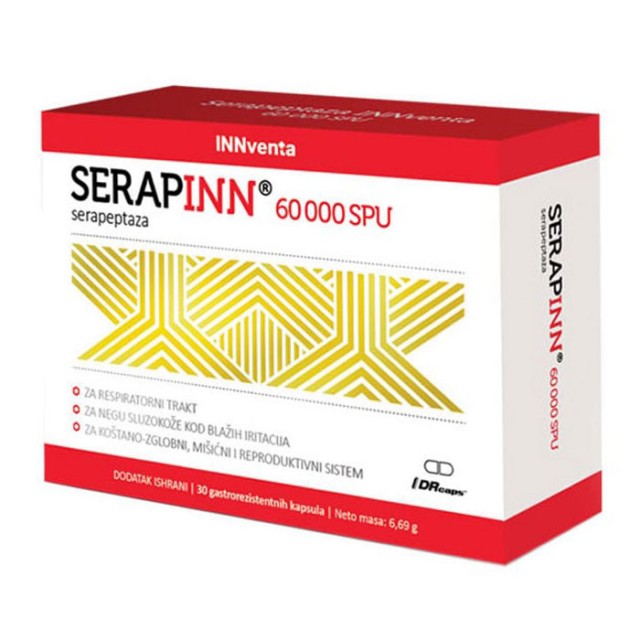 SERAPINN® is a proteolytic enzyme that has been used in the world for over thirty years. SERAPINN® has a highly pronounced enzymatic activity including potent anti-inflammatory, anti-diatematous, mucolytic and fibrinolytic activity.

Based on 0 reviews. - Write a review

This offer ends in:

SERAPINN® is a proteolytic enzyme that has been used in the world for over thirty years. SERAPINN® has a highly pronounced enzymatic activity including potent anti-inflammatory, anti-hematomatic, mucolytic and fibrinolytic activity.

In what conditions is SERAPINN® recommended?

Surgery: Postoperative swelling and blood vessels, remission of the swelling after surgical suturing, establishment of tissue drainage, facilitation of expectoration of the post-anesthetic slime.

Excellent tolerability of SERAPINN® capsules thanks to DRcaps ™ - no gastric problems

DRcaps ™ capsules are made with innovative formulated hypromellose (HPMC) that is acid-resistant in the stomach, decomposes very slowly and allows the contents of the capsule to remain intact as it passes through the stomach.

1-2 capsules a day with about 200ml of water. SERAPINN® should be taken 1 hour before a meal or two hours after a meal.

It is not intended for persons under 12 years of age.