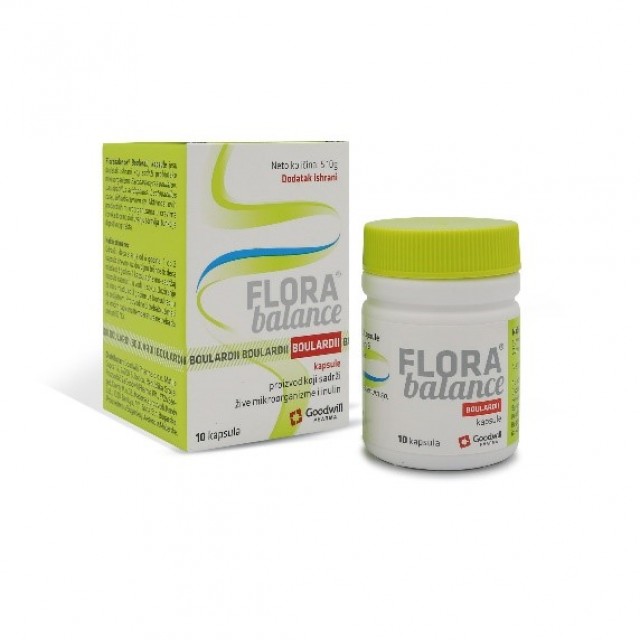 Florabalance® Boulardii, capsules are used in increased intestinal peristalsis ("nervous bowel syndrome"), acute and traveler's diarrhea, as well as in diarrhea caused by the use of antibiotics. It is also recommended as an adjunct to the therapy of Clostridium difficile infections and to the treatment of Helicobacter pylori infections.

Saccharomyces boulardii is a non-pathogenic yeast used for the treatment of diarrhea caused by the use of antibiotics, as well as for the prevention of diarrhea in critically ill patients who eat enterally. S. boulardii secretes a protease that breaks down two protein exotoxins, toxin A and toxin B that cause diarrhea and clostridia-induced colitis (Clostridium difficile). The protective effect of S. boulardii on clostridial diarrhea can be partially attributed to this proteolytic degradation of toxin A and toxin B.

Probiotics are live microorganisms that most often include different types of bacteria of the genus Lactobacillus and Bifidobacterium, which, by improving the balance of intestinal microflora, can have a positive effect on the development of the immune system, normal intestinal morphology and maintaining a chronic and immune-balanced inflammatory response.

Changes in the intestinal microflora that can occur due to the use of antibiotics, various diseases and the aging process of the organism can negatively affect their role.

Probiotics can have antimicrobial, immunomodulatory, anticancer, antidiarrheal, antiallergic and antioxidant effects. Their metabolic activity absorbs more vitamins (biotin, pantothenic acid, vitamin B12) and other nutrients, which leads to the creation of an environment that prevents the growth of pathogenic bacteria.

Inulin is a natural oligosaccharide that helps the development of beneficial bacteria in the colon. It belongs to the group of prebiotics. Inulin is poorly digested in the small intestine, but undergoes fermentation of colon bacteria resulting in a change in the colon ecosystem in favor of some bacteria such as bifidobacteria, which can have a positive health effect. There are studies that indicate possible antitumor, antimicrobial, hypolipidemic and hypoglycemic effects, and also inulin can improve the absorption of minerals, their balance and achieve a positive effect in osteoporosis.

Adults and children older than 6 years: 1 to 2 capsules daily, with enough fluids.

Children younger than 6 years: 1 capsule daily - stir the contents of the capsule in water or juice. Dosage for children under 3 years of age in consultation with a pediatrician.

The product should not be taken with hot drinks (temperature should not exceed 50 ° C).

A dietary supplement is not a substitute for a varied and balanced diet and leading a healthy lifestyle. Do not exceed the recommended dose. The product should not be used concomitantly with drugs used to treat fungal diseases. Florabalance® Boulardii, capsules are not recommended for people with lactose intolerance, pregnancy and breastfeeding. The product is not recommended for people who are hypersensitive to any of the ingredients of the product. Consult a doctor / nutritionist before use.

After opening, store in a dry place at temperatures up to 25 ° C. Keep out of reach of children.