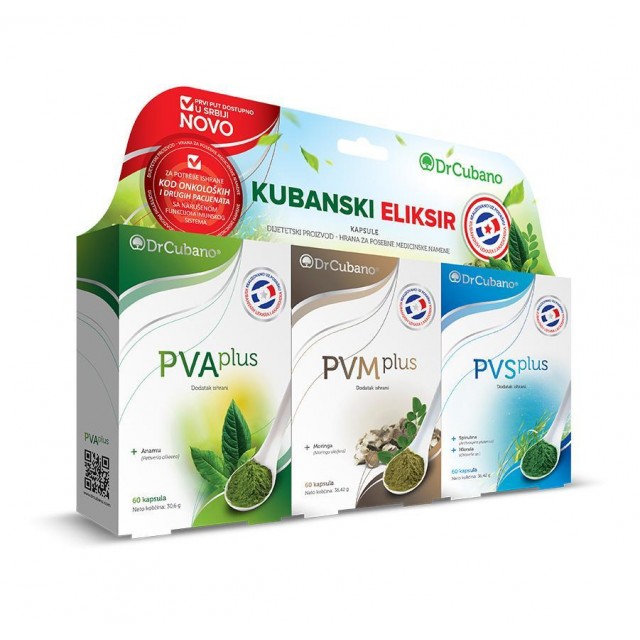 The basis of the Cuban elixir consists of the plants anamus, moringa and the algae spirulina and chlorella. They contain active substances, carriers of all benefits, which together in synergy give the best results. The three products that make up the Cuban elixir are composed exclusively of natural ingredients, powerful plants whose action encourages the strengthening of the organism and the preservation of health.

CUBAN ELIXIR is a superior immunocomplex created with the support of Cuban doctors and academics with the aim of influencing the overall health and general condition of the organism. It is a natural source of high concentrations of biologically active components, and is therefore intended for oncology and other patients with impaired immune function.

It is used as a supplement to the diet of all people who have a decline in immunity - immunosuppression:

The method of using the preparation differs between healthy people and people whose health condition is impaired.

Cuban elixir is a complex preparation consisting of three products:

PVA plus - contains 60 capsules of anamu plant (one capsule 400mg)

The Cuban elixir includes the anamu plant, which appears for the first time registered not only in Serbia, but also in Europe, then moringa with a unique combination of seeds and leaves in a form that does not exist on our market and algae spirulina and chlorella in one capsule, which is also novelty in our market.

Each of these individual supplements has a different mechanism of action on the functioning and strengthening of the immune system. By recommended use of all products together, thanks to the synergy, the maximum effect on the immune system and the general condition of the organism is achieved.

PVA plus - anamu plant has been proven to increase the activity of NK cells - killer cells as much as 100 times. NK cells represent the first line of defense of the immune system. Their main role is to recognize and destroy infected and tumor cells.

PVS plus - spirulina and chlorella are the most nutritious algae on the planet Earth, which are also among the strongest antioxidants in nature. Their role is to cleanse the body of free radicals and heavy metals that affect the proliferation of cancer cells.

PVM plus - moringa, rightly called the tree of life, contains more than 470 nutrients of high concentrations, whose role is very important in strengthening the defense capabilities.

Oncology patients and all persons suffering from chronic diseases, doctors in Cuba, recommend the use of herbal preparations as a supplement to conventional therapy.

The complex of three dietary supplements - anamua, moringa and spirulina with chlorella has proven to be the most successful in therapy in cancer patients, where it records high positive results.

Also, people with a decline in immunity caused by any disease have a good immune response and results when using this complex.

Why is the Cuban elixir a high-efficiency preparation?

The Cuban elixir is not a simple sum of three high quality products. The Cuban elixir is much more than that! He is a whole, that is. complex code when each of the products plays a very important role in strengthening the defense and achieving general well-being of the organism.

The compatibility and synergistic action of all its ingredients, their concentrations and mutual relationship, the technological process of production and the way in which the preparation is consumed are responsible for the high efficiency of the Cuban elixir.

The components that are part of the Cuban elixir, anamu, moringa, spirulina and chlorella are natural sources of high concentrations of biologically active components, but they are not the only factors that affect the effectiveness of the preparation itself.

Precisely defined concentrations, the mechanism of action of components at the cellular level and the fact that not only are there no mutual contraindications to the active ingredients of any of the components, but that each of them affects the creation of ideal conditions for the usability of others. Then, the way of using the preparation is extremely important, which differs in healthy people and people with health problems, especially oncology patients.

Supplementation is a very important part of the diet, whether it is the need to strengthen the body's defenses or to fight serious health problems, but it is crucial what and in what way the supplements are used.

Consuming high doses of individual minerals, vitamins, proteins, amino and fatty acids… not only does not have to have a positive impact on health, but can also be very harmful.

Apart from the fact that their utilization is in most cases very low, participating in numerous biochemical processes that take place in the body can lead to metabolic disorders, liver overload, and even toxicity.

When creating the preparation, Cuban scientists aimed to create a product of high quality and efficiency, without harmful consequences for the health of users. One of the basic tasks was to avoid the above problems. Replenishment of all nutrients in concentrations that are sufficient, neither too small nor too large, was also one of the priorities.

The secret of the action of the Cuban elixir is in the usability of all ingredients, achieving balance and conditions for activating the immune response during "encounters" with infected and malignant cells and all harmful agents to health.

Dosage and method of use:

The recommended use of Cuban Elixir, as a dietary product for other patients with impaired immune system, athletes, as well as healthy people, is one capsule 3 times a day of each individual product (PVA Plus, PVM Plus, PVS Plus). PVA Plus is used 15 minutes before meals and PVM Plus and PVS Plus after meals. An adaptation period is also necessary to start using the Cuban Elixir.

The first week, one capsule of each dietary supplement, only in the morning

The second week, one capsule of each dietary supplement, morning and afternoon

The third week, one capsule of each dietary supplement, in the morning, afternoon and evening

It is recommended that the use of the Cuban elixir to strengthen immunity lasts for 3 months in a row, after which there is a break of 15 days. After a break, the cycle can be repeated, always the same duration as the break between cycles.

Contraindications: People who are hypersensitive to some of the ingredients, pregnant women, nursing mothers, as well as people under the age of 18 are not recommended to take these supplements. Prior consultation with the competent doctor is necessary.

Note: Recommended natural products should never be used as a substitute for a varied and balanced diet and healthy lifestyle, nor should they exclude compliance with the therapeutic regimen prescribed by doctors or other specialists, but only as a supplement to the diet or prescribed therapy.